A League and cup double for Gosport Borough’s college academy team in their first competitive season is evidence that it can provide talent for the club’s first team says manager Joe Lea.

He and fellow Borough player Pat Suraci set up the club’s centre of excellence two years ago but after last season’s games were wiped out by Covid they have seen their under 19 St Vincent College side win every game this season, picking up the Hampshire Colleges League Division Two title and the Steve Perkins Cup.

The 23-year-old, who has stopped playing to concentrate on coaching, said: “The season has gone really well, and not just because we’ve won two trophies but because of the attitude the boys have shown.

“There is a strong group who want to play for the first team at Gosport Borough and they believe they have a chance, and rightly so with the programme that we have set up. If they are good enough, and Shaun Gale the manager is very open to it and very involved, they will get their chance.”

The 16 to 19-year-olds on the two-year St Vincent Elite Football Academy programme, run in conjunction with Borough’s centre of excellence, study maths and English alongside at least 12 hours of football coaching a week from the two former Southampton academy players as well as tactical analysis and fitness.

“The fact we get to coach the boys four days a week means we really get to spend a lot of time with them and we get to put our ideas across to them and you can see that come out in the games,” said Mr Lea.

“The college has been superb for the boys in providing the education side of things, they are very understanding that the boys want to play football and very supportive of what they do. To have all the boys based in one place and to be able to use the pitches, the gym area and the sports hall has been hugely beneficial.”

The course gives the youngsters a grounding in how professional and semi-professional clubs operate and provides a platform to go on to be players or coaches. “Stephen Culley our captain last year was really big on coaching and he is now studying it at Chichester University,” said Mr Lea. “He has joined our centre of excellence and is helping coach the under 9s to under 14s with a view to ending up with the under 18s and 23s.”

After sealing the league title two weeks ago the team’s 100 per cent season was capped with a thrilling 3-2 cup final win over Peter Symonds College at Borough’s Privett Park ground. Mr Lea said it was an entertaining game for the neutral but less so for the coaching staff.

“We were 2-0 up through Christian Bennett and Tom Rolls but the boys got a little bit complacent and they pulled it back to 2-2,” he said. “To their credit they showed good character and scored the winner through Will Ayres with just a few minutes left and penalties looming. A late winner like that means there are always some great scenes at the end.” 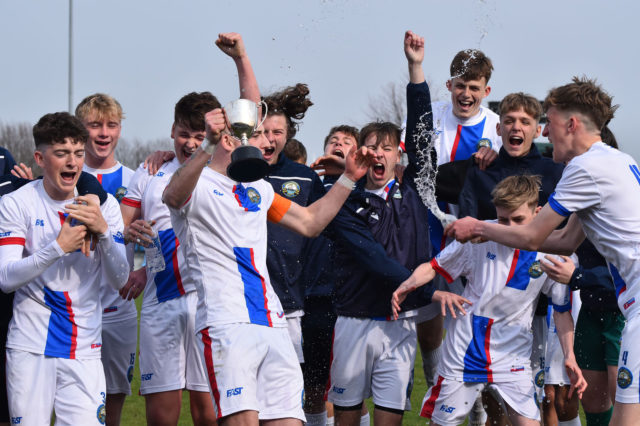 Despite the silverware he said the key achievement this year has been the success of the course. Mr Lea said: “Winning isn’t everything at this age, it’s more about the individuals developing. The idea is that as many of these boys as possible end up in the Gosport Borough first team. Obviously not all of them will make it but all of them have shown a great attitude, even those who haven’t had much playing time, so it doesn’t get much better than that for us.”

The outlook for next season is positive after this term’s success. “We’ll be facing harder league opposition in division one but the ambition is to challenge there, go as far as we can in the cup again and keep developing the programme as much as we can,” said Mr Lea.

“The signs are that we will have quite a few new players coming into the programme in September which is great. More quality players coming in will push the others and that’s how we keep improving and developing, which is what it is all about.”

Find out more about the GOSPORT BOROUGH FOOTBALL CLUB – Centre of Excellence and other sports related courses here: